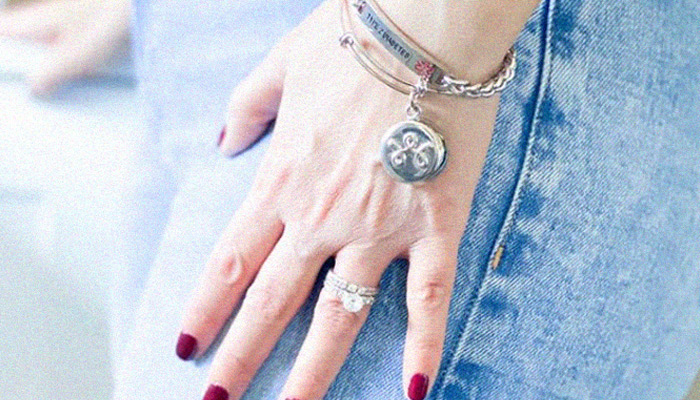 invisaWear is a company that produces smart jewelry and accessories. The company’s specialty is a personal safety device that allows you to get in touch with your emergency contacts or 911 with just two clicks. Think panic button, but stylish. Similar to other smart jewelry brands, such as Bucardo and Totwoo, invisaWear’s philosophy is that aesthetics is just as important as the tech features. Their online store says “jewelry meets technology”. In this article, we’ll take a quick look at the founding of invisaWear, its product offerings, features, and discuss some of its weaknesses.

This article is part of our smart jewelry brand series. 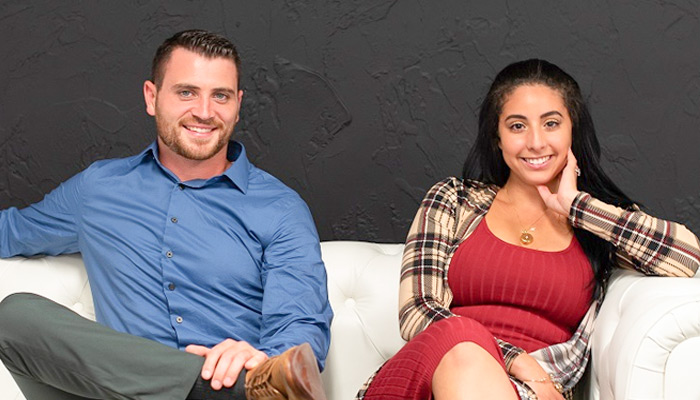 invisaWear was founded by Rajia Abdelaziz (CEO) and Ray Hamilton (CTO) when they were still undergraduates students at the University of Massachusetts Lowell (UML). Why did two electrical engineering students decide to create a personal safety wearable? According to the official story, Rajia found herself in a dicey situation one night, she managed to escape to safety but the whole situation made her she felt helpless. She didn’t have a split-second to find her phone in her bag to call the police or her friends. Her experience and the experience of many other women inspired her to create a panic button with Ray.

After gathering feedback which includes input from Rajia’s grandmother, the duo decided that the panic button had to be stylish and discreet. That concept became invisaWear. 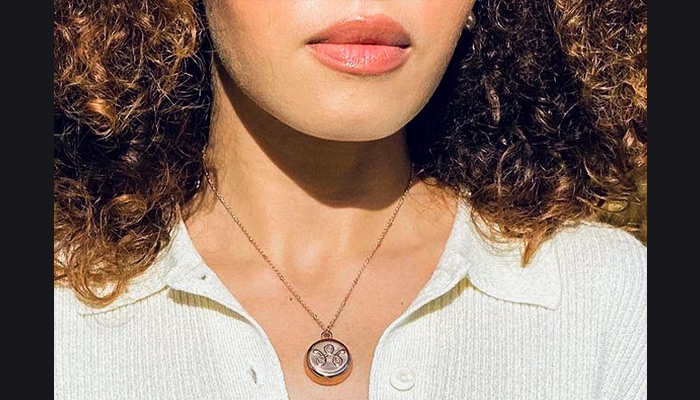 But a concept is just an abstract idea. The team needed to produce a proof-of-concept prototype. But to make a prototype, they needed money. The founders reportedly mentioned that they ran into a chicken-and-egg problem during this stage. Investors want to see a prototype before they’re willing to invest, but to make a prototype the team needed funding. Unlike some startup founders who drop out of college to run their new companies, Ray and Rajia decided to run their startup while pursuing their degrees. As if fortune is on their side, this turned out to be a great idea as it gave them access to college resources and networks.

In 2016, Rajia and Ray won the DifferenceMaker Idea Challenge and received a $4500 prize. DifferenceMaker is a series of events and programs organized by the Rist DifferenceMaker Institue to promote innovative problem solving and entrepreneurial thinking among University of Massachusetts Lowell students. Winning the competition provided the initial funding Ray and Rajia needed to create a prototype. Later in 2017, invisaWear became one of the 127 companies to get accepted into the Mass Challenge international startup accelerator out of 1000 applicants. In February 2018, they launched an Indiegogo campaign to raise funding and promote their smart jewelry. The crowdfunding campaign was a success and they were able to raise more than $30k funding. Perhaps partly thanks to the successful Indiegogo campaign, the founding team was able to secure more funding from investors and loans after that. And then in mid-2018, their product was officially launched. 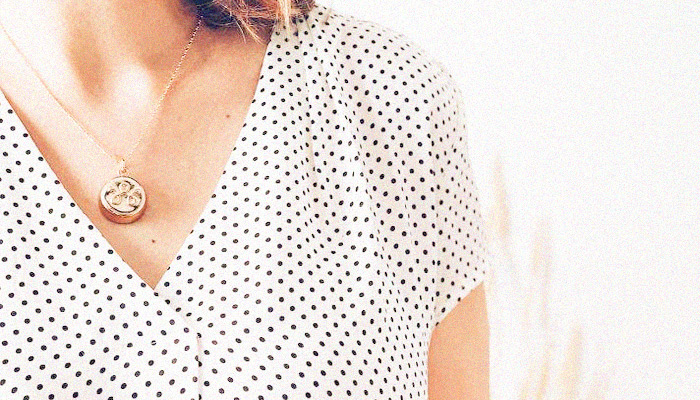 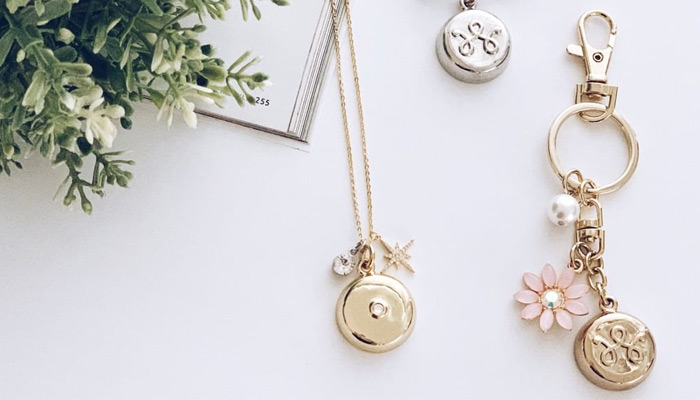 invisaWear offers personal safety wearables such as necklaces, bracelets, and keychains. Functionally, they are all the same. They are simply different manifestations, different form factors of the brand’s core product — its personal safety charm.

So what is the main selling point of invisaWear? What is its core feature?

Simply put, invisaWear is a stylish and discreet panic button. It is a panic button in the disguise of a jewelry piece. When you press it twice, it sends out a distress call in the form of a text message to your emergency contacts.

For it to work, you will need to be within a certain distance from your phone. This is because the device communicates with your phone via Bluetooth and there’s a certain limitation to the Bluetooth range.

You’ll also need to set up the device before using it. That involves installing the invisaWear app, pairing with your device, and entering information like personal details, emergency contacts, etc.

The device’s test mode is a nice thought, it helps to get rid of the anxiety of 1. the device isn’t working, or 2. accidentally prank call 911 while you’re testing it. In test mode, you can quickly check if the device is working by sending out test notifications to your emergency contacts.

No, it is not waterproof. So avoid getting it submerged in water or getting water splashes on it. Never wear it to swimming or sauna — as suggested by their care guide. Failure to do so will damage the circuitry in the device. 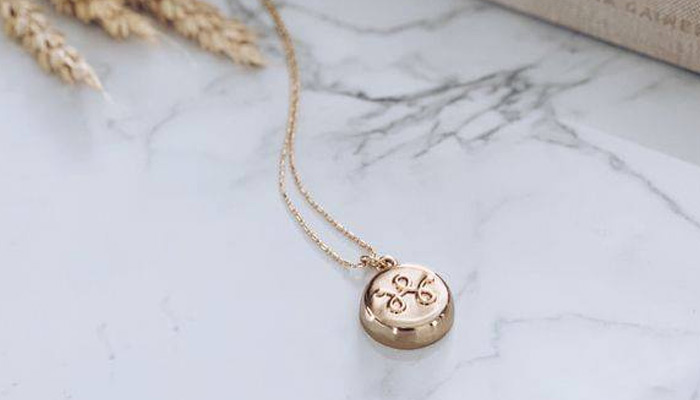 Admittedly, invisaWear looks pretty good as a panic button. The device’s lack of features is certainly a strength, not a weakness when it comes to this personal safety devices. When anxiety is high and tunnel vision kicks in, operating a complex device can become a huge challenge. Also, its simplicity enables it to operate up to 2 years. A device with higher complexity likely won’t have such a long battery life. After the battery runs out, you will have to replace the device with a new one. That’s right. You can’t replace the battery. More on that later.

The team behind invisaWear markets their product as smart jewelry, so it’s only reasonable that it is judged as one. Unfortunately, invisaWear is just not that impressive as a jewelry piece. It is eye-catching alright, but not in the best way. The charm is bulky and the design… well, I think there’s hardly any jewelry design at all. It’s a shiny button with some embossed curves (invisaWear logo – more on that later) on it. Similar looking jewelry pieces are a dime a dozen on Etsy and Aliexpress. When I was researching for this article, I also saw that someone was criticizing it as “cheap and tacky.” in a comment section of some article. As much as I hate to be critical, I’m afraid the commenter was right.

As of now, full-priced invisaWear products cost between $129 to $249. For a smart jewelry piece that lacks design, it has quite a hefty price tag. One can argue that safety is priceless and there’s no subscription fee. These are reasonable arguments but what about the fact that you can’t change the battery? When the battery dies you’ll have to buy a replacement device. The battery is said to last up to two years, but the warranty only covers one year. They do offer a discount for the replacement unit but at $99 I can’t help but feel like I’m being ripped off.

Discreet but not really?

Another invisaWear’s marketing talk point is the device is a discreet way to get in touch with your emergency contacts. To be fair, that is true to some extent. It is a lot more discreet compared to panic buttons that look like a garage door remote. But with the size of a quarter (give or take) and the in-your-face invisaWear logo, it’s attention-grabbing and surprisingly non-discreet. What that means is when you’re wearing it, it will become a central part of your outfit. And for the people who recognize the logo, they’ll know that you’re wearing a big panic button around your neck.

This article was originally published on Urban Men Outfits — we cover topics like style tips, gadgets, hairstyles, and more.c 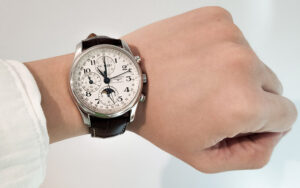 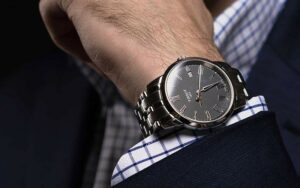 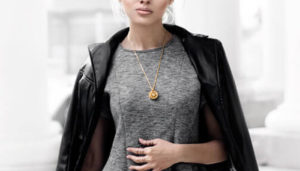 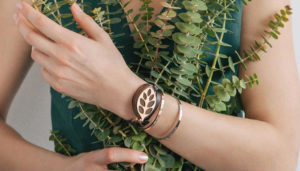 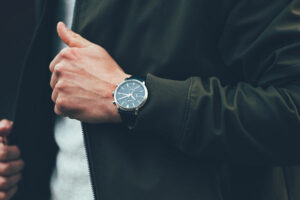 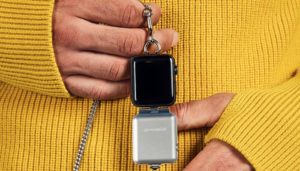